Tanzania is population in excess of 1,400 different bird species and many more that come down and up here from Europe and Southern Africa, Tanzania is probably one of the greatest places on the planet for birders. From the gigantic Marshall eagle to the delicate sunbird, the elusive Shoebill to the omnipresent Marabou, there is certainly something to please any keen twitcher! You will visit Lake Manyara National Park, Serengeti National Park, Ngorongoro Crater and Tarangine National Park during this tour, and you may spot more than 400 species of birds throughout this trip. The birds that you are likely to find in this area include Scaly Francolin, Silvery-cheeked Hornbill, White-starred Robin, White-eared Barbet, Stripe-faced and Grey-olive Greenbuls, Red-throated Twinspot, Blackthroated Wattle-eye, African Emerald Cuckoo, Red-winged and Violet-backed Starlings.

Arrival in Tanzania, our staff will pick you up at Kilimanjaro international Airport and transfer to Arusha where you will have overnight at lodge.

The inn is a charming country estate that was once an old coffee farm, and still retains the nostalgic air of a well loved homestead. Sprawling ten acres of fertile greenery, the grounds are a natural extension of Mt Meru’s sloping foothills, and offer a sanctuary for the birds and wildlife indigenous to the area.

Elegantly rustic cottages are dotted along the river and in thickets of tall trees, while lush lawns and birdsong make for a peaceful and picturesque setting. Set in the heart of an area rich in nature reserves, montane forests and vibrant village culture, the scope for exploration is endless.

The restaurant concocts tasty meals of garden-fresh ingredients and old family recipes, as well as oven-fired pizzas and the best of the region’s locally grown coffees. Delicious candle-lit dinners are served by the warmth of the fireplace, or under the stars and the watchful eyes of resident owls.

Rivertrees combines unpretentious comfort with subtle accents of style to create a timeless pause in a traveler’s journey, and a sense of warmth and genuine welcome. 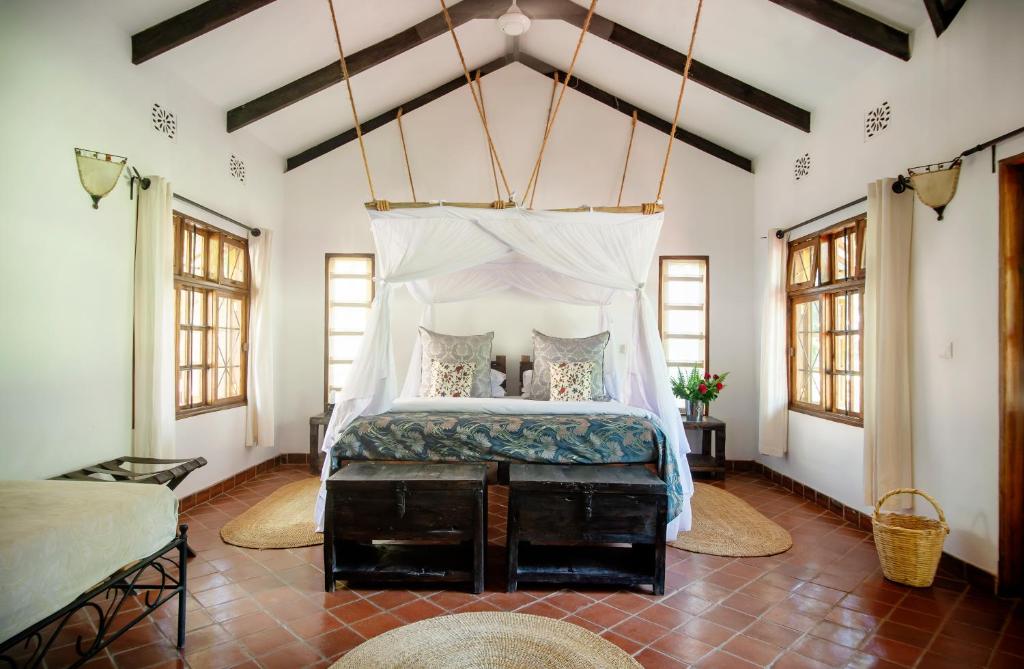 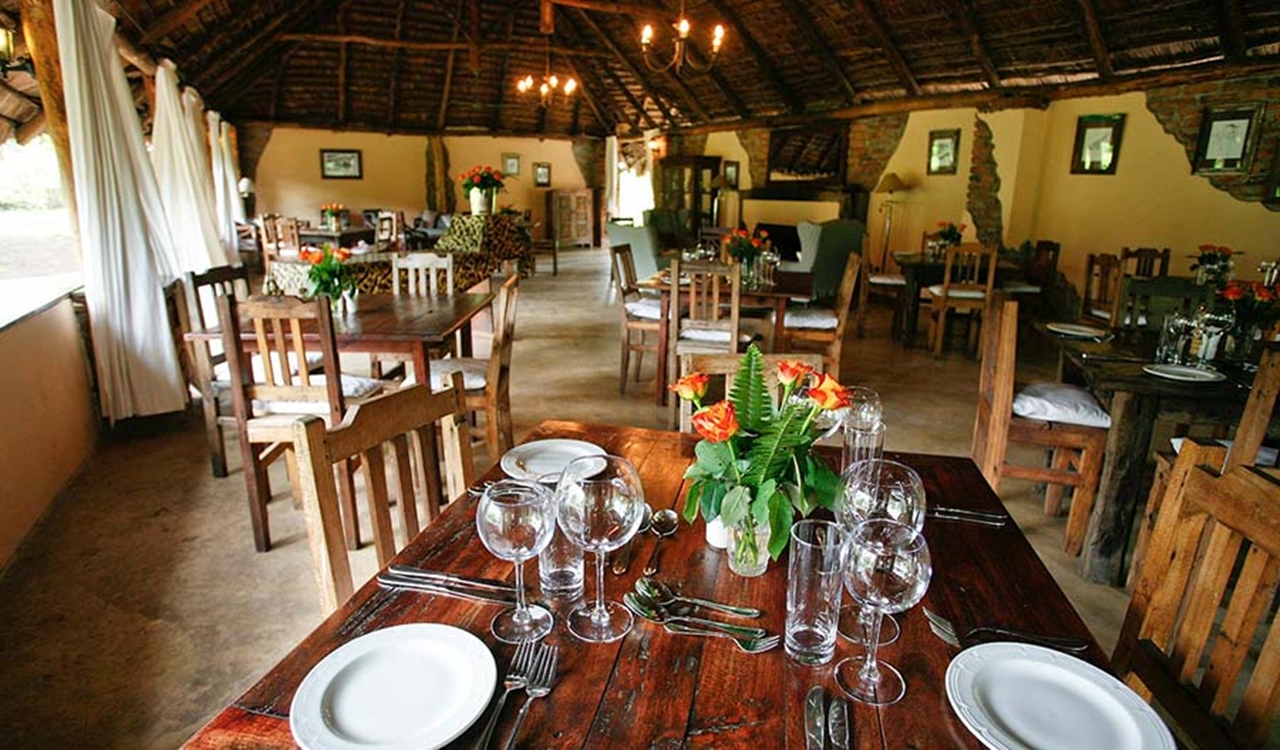 Arusha National Park is located close to the city of Arusha, the capital of the northern safari circuit in Tanzania, and is a complete contrast to birding anywhere else in the much drier surroundings. Spend the full day at Arusha National Park game and bird viewing. Enjoy a picnic lunch at Momella Lake, famous for huge flocks of colorful flamingos and stunning views of majestic Mount Kilimanjaro. Game drive around the different habitats in this truly beautiful park. There are black and white colobus monkeys (unique to this park in northern Tanzania), Sykes and vervet monkeys, shy forest duikers, leopards, and substantial herds of antelope. Guided by an armed ranger, you will hike the slopes of Mount Meru in dense forest or at the crater rim of Ngurduto Crater. Birds can be spotted everywhere in this beautiful national park, and species to look out for include silvery-cheeked hornbill, Hartlaub’s turaco, and various water birds including yellow-billed stork and many more.

We will depart Arusha in the morning and head directly to Tarangire National Park, named after the river that runs through it which quenches the thirst of a variety of animals, including giraffes, waterbucks, wildebeests, zebras and a high density of elephants. Tarangire is home to over 550 species of birds and its hilly landscape is dotted with baobabs and diverse grasses. The Tarangire ecosystem is the third largest in Tanzania, sprawling over a vast 20,000 square km (over 7,700 sq miles). Seasonally, the park supports the second largest concentration of wildlife in Tanzania, surpassed only by the Serengeti during peak migration. However, Tarangire is most famous for its huge numbers of African Elephants that congregate along the meandering Tarangire River. We will take our time to observe these massive pachyderms and will surely be amazed at their tender family interactions. Other mammals likely to be seen include Impala, Kirk’s Dik-dik, comical Common Warthog and Giraffe.

Dawn game drive in Lake Manyara National Park, perhaps the most beautiful on the circuit. Famous for its elephants and lions-in-trees, the park boasts rich ground water forest, lakeside grassland and an abundant variety of trees and shrubs. Lake Manyara National Park this reserve has a diverse range of habitats, including dense forest, Acacia woodlands, grasslands, floodplains and, of course, the actual lake. The lake regularly holds some of the largest concentrations of these birds of any of the East African Rift Valley lakes. There are also numerous pools on the outskirts of the lake and birding these is definitely a highlight. An abundance of waterbirds are found here, including typical African families such as pelicans, spoonbills, ducks, herons, storks, egrets, cormorants, kingfishers, jacanas, plovers and lapwings

Today we make our way to the world-famous Serengeti National Park. En route we pass through an area which is home to the Maasai people. These tall, proud nomadic warriors are famous for their legendary prowess in battle and singlehanded acts of bravery in fights with wild animals. Time dependent, we may stop at the famous Oldupai Gorge, so named after the wild Sisal plant that grows in the gorge. As a result of massive geological activities over the eons, Oldupai provides a unique record of countless years of fossilized creatures and plants in a series of stratified rocklayers. Most famous of all discoveries, which revolutionized thinking on hominid evolution, have been those of Australopithecine hominid remains found by the Leakey family. After an introductory lecture we will continue our travels westward on the rutted dirt track across the vast, flat and seemingly endless Serengeti Plains, to spend three nights in one of the world’s most renowned game reserves. 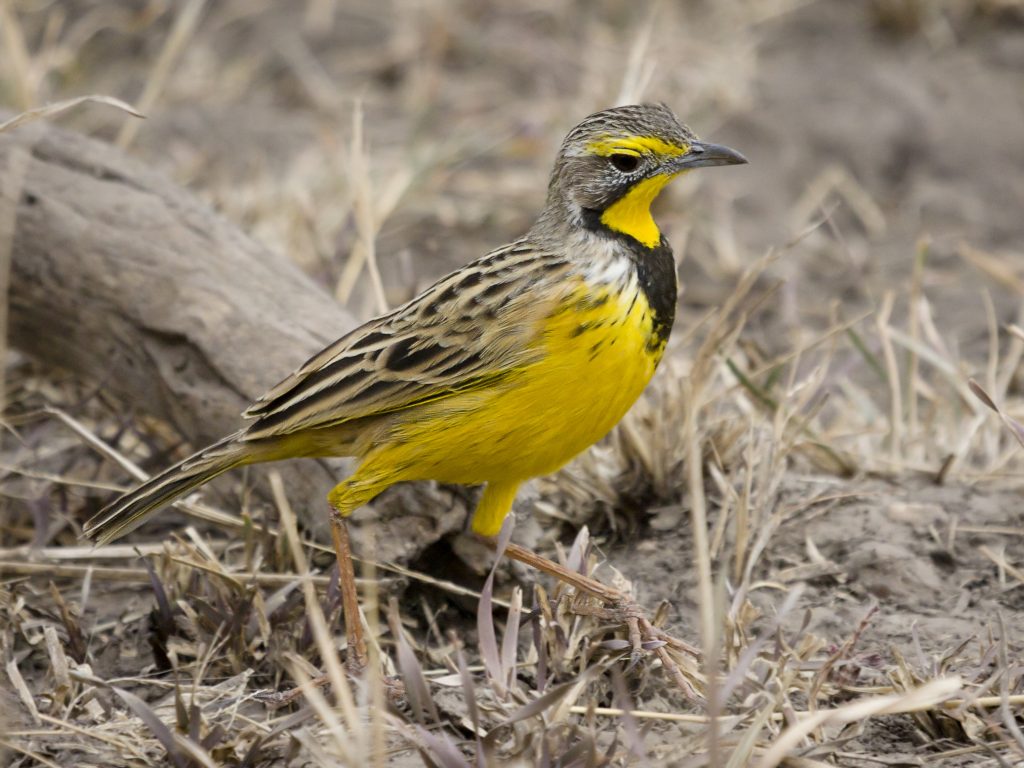 The Serengeti, literally meaning ‘Endless Plain’ in Maasai, consists mostly of grasslands interspersed with Acacia woodlands and rocky outcrops. There is little permanent water in the park and this fact, combined with a fairly regular rainfall pattern, has resulted in the world-famous Wildebeest migration, when up to two million large ungulates move between the Serengeti in Tanzania and the Maasai Mara in Kenya. Our visit is timed so that we might bear witness to unbelievable numbers of wildebeest, zebras and antelopes, an unrivalled and primeval wonder of the natural world. During our visit to the Serengeti we will explore the southern and central areas. Once again, we have the chance of finding the full complement of African mega fauna. We hope to see lazing prides of Lions, a Leopard draped over a large tree, an aloof Cheetah resting on or near a vantage point, skulking Spotted Hyaenas, jackals and, if we are fortunate, the bizarre Bat-eared Fox. Several species of smaller cats such as Caracal, Serval or African Wild Cat may also be seen. Besides the wildebeest, the Serengeti supports huge populations of Plains Zebra, African Buffalo, And other species of birds such as the magnificent Saddle-billed Stork, up to six species of vulture, the grotesque Marabou Stork, stately Secretarybird, Bateleur, Chestnutbellied and Yellow-throated Sandgrouse, Kori and White-bellied Bustards, coveys of Coqui Francolins, Temminck’s Courser, Pearl-spotted Owlet, Red-fronted Barbet, Tanzanian Red-billed Hornbill, the whimsical Southern Ground Hornbill and more. 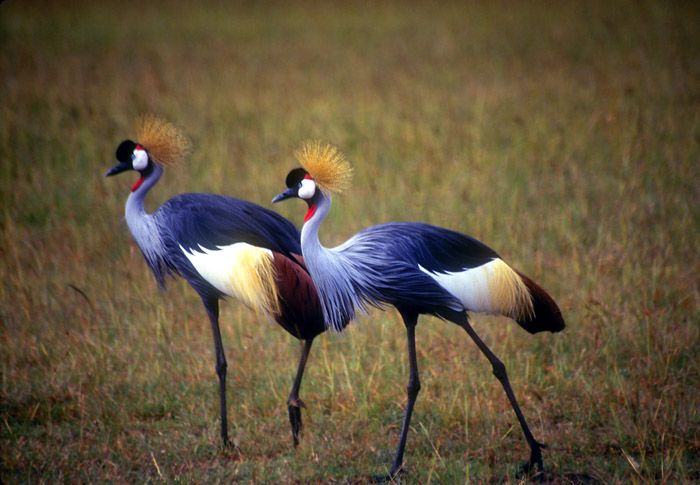 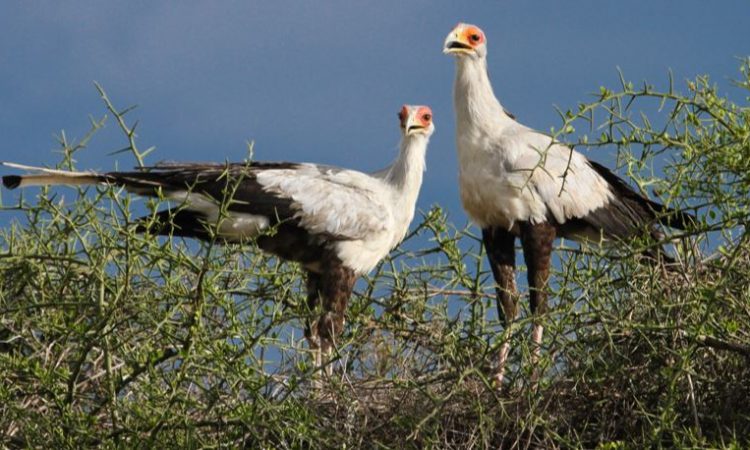 After breakfast we make our way out of the Serengeti towards Ngorongoro. Driving our way out of the Serengeti gives us further chances of finding any species that we might have missed. The Ngorongoro is one of the World Heritage Site protects Earth’s largest intact volcanic caldera (260km²/100mi²) and one of the world’s most scenically breathtaking natural areas. The fantastic forests that cloak the rim of this iconic site are home to a feast of Afro- montane forest birds. Hildebrandt’s Francolin, Schalow’s Turaco, the elusive Brown-backed Woodpecker, beautiful Cinnamon-chested Bee-eater, Mountain Greenbul, Brown-headed Apalis, Brown Parisoma, skulking Cinnamon Bracken Warbler, busy flocks of Mbulu White-eyes and dazzling Tacazze, Golden-winged and Eastern Double- collared Sunbirds can be found. We will bird the surrounds of our lodge, and enjoy the vistas of the Ngorongoro Crater from dedicated viewpoints. 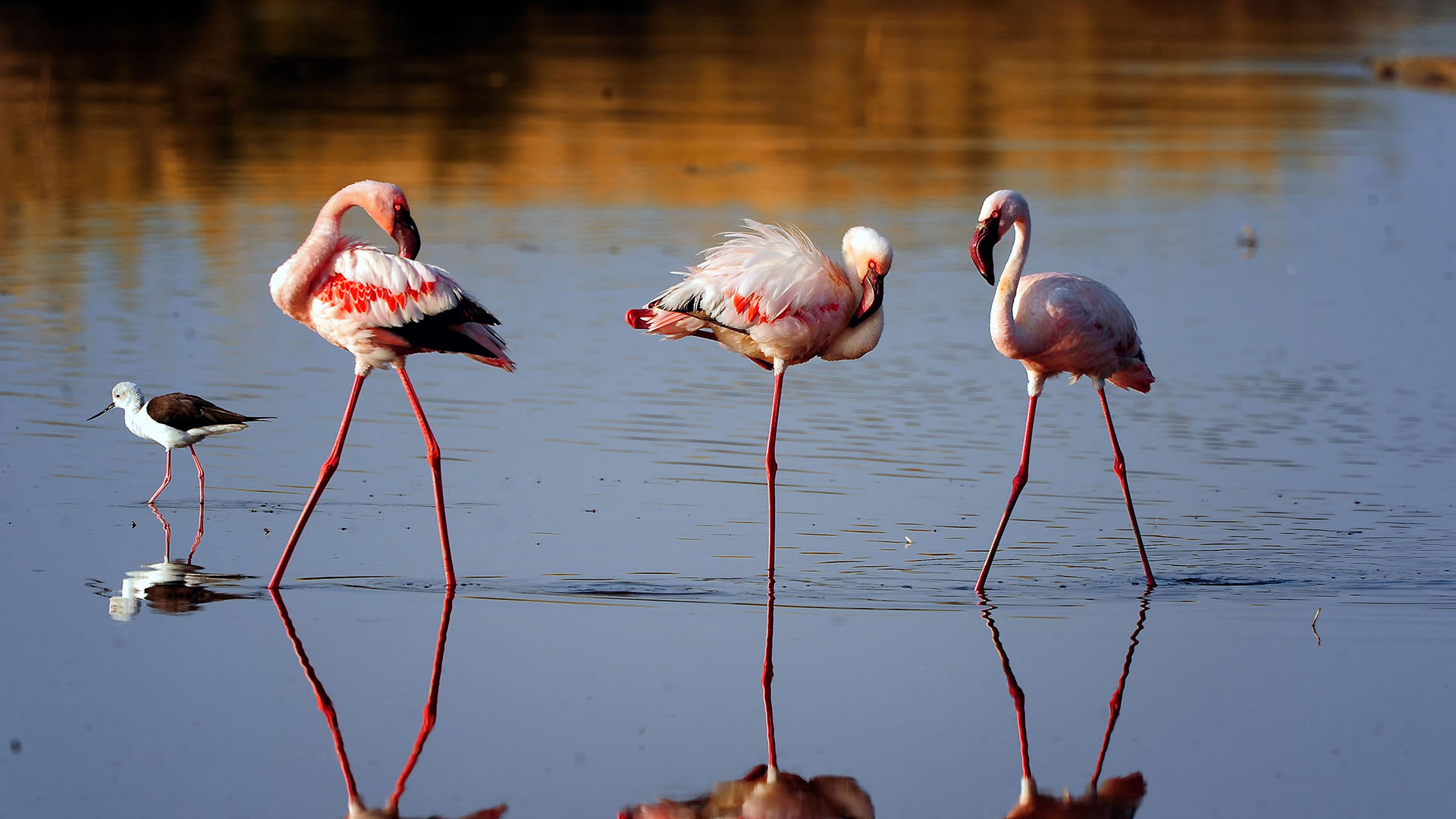 The crater is deluxe ‘Big Five’ territory and a photographer’s dream. Most of the animals are extremely relaxed and habituated to the presence of human admirers, and the high crater walls, usually cloaked in a pure white frosting of clouds, make for dramatic back-drops to animal photographs. In addition, the crater floor provides a mini-example of a complete African ecosystem with forests, lakes, grasslands, swamps and rivers. Between 25,000 and 30,000 large animals reside in the crater and great concentrations of Common Wildebeest and Plains Zebra are supplemented by smaller numbers of African Elephants (we hope to find some of the crater’s famous Black Rhinoceros, Hippopotamus, Common Eland and Thomson’s and Grant’s Gazelles. The crater reputably boasts the world’s highest concentration of predators, and these include Lion, Cheetah, Leopard, Serval, Bat-eared Fox, Spotted Hyena, African Golden Wolf (Golden Jackal) and Black-backed Jackal. 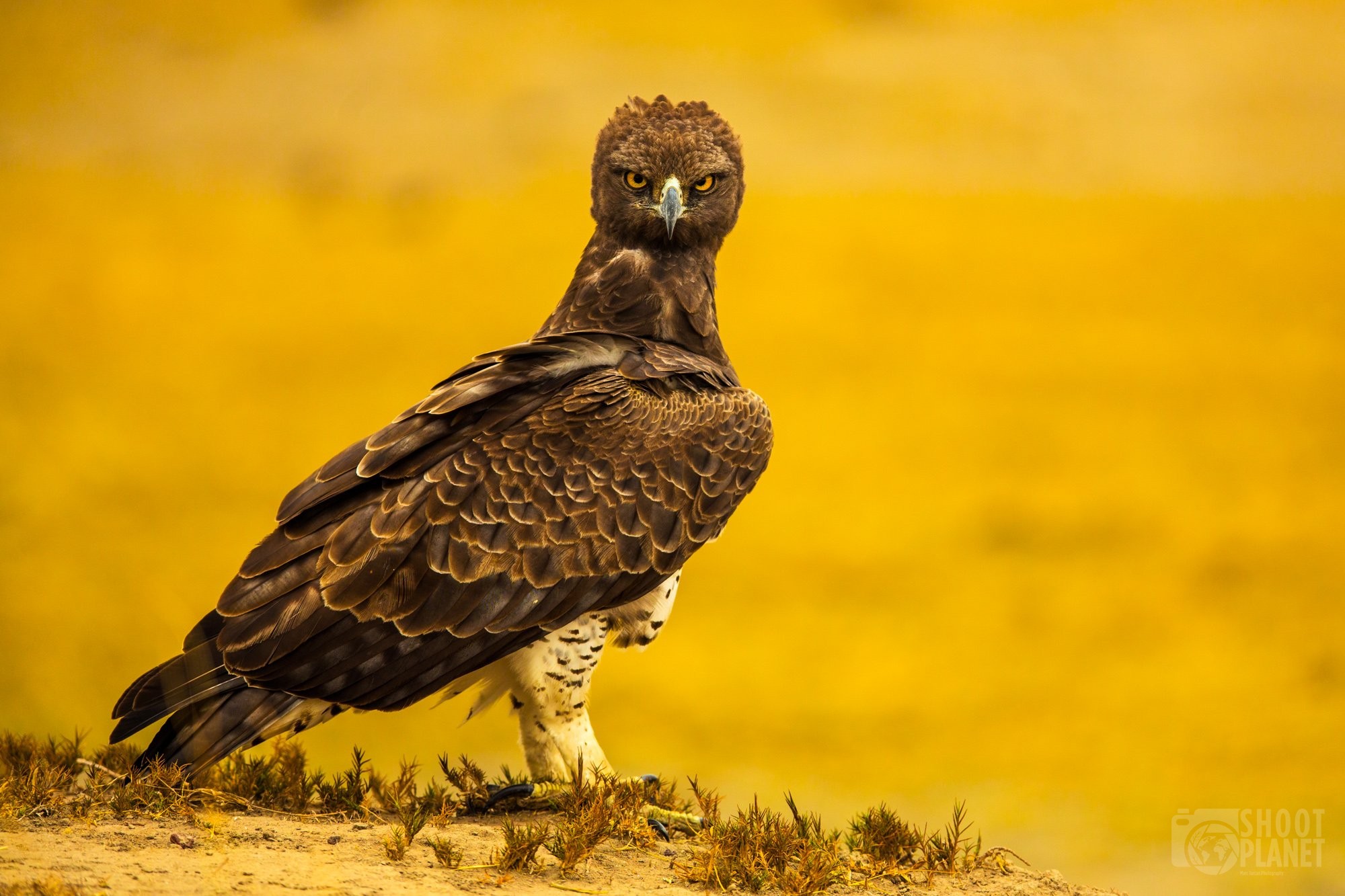 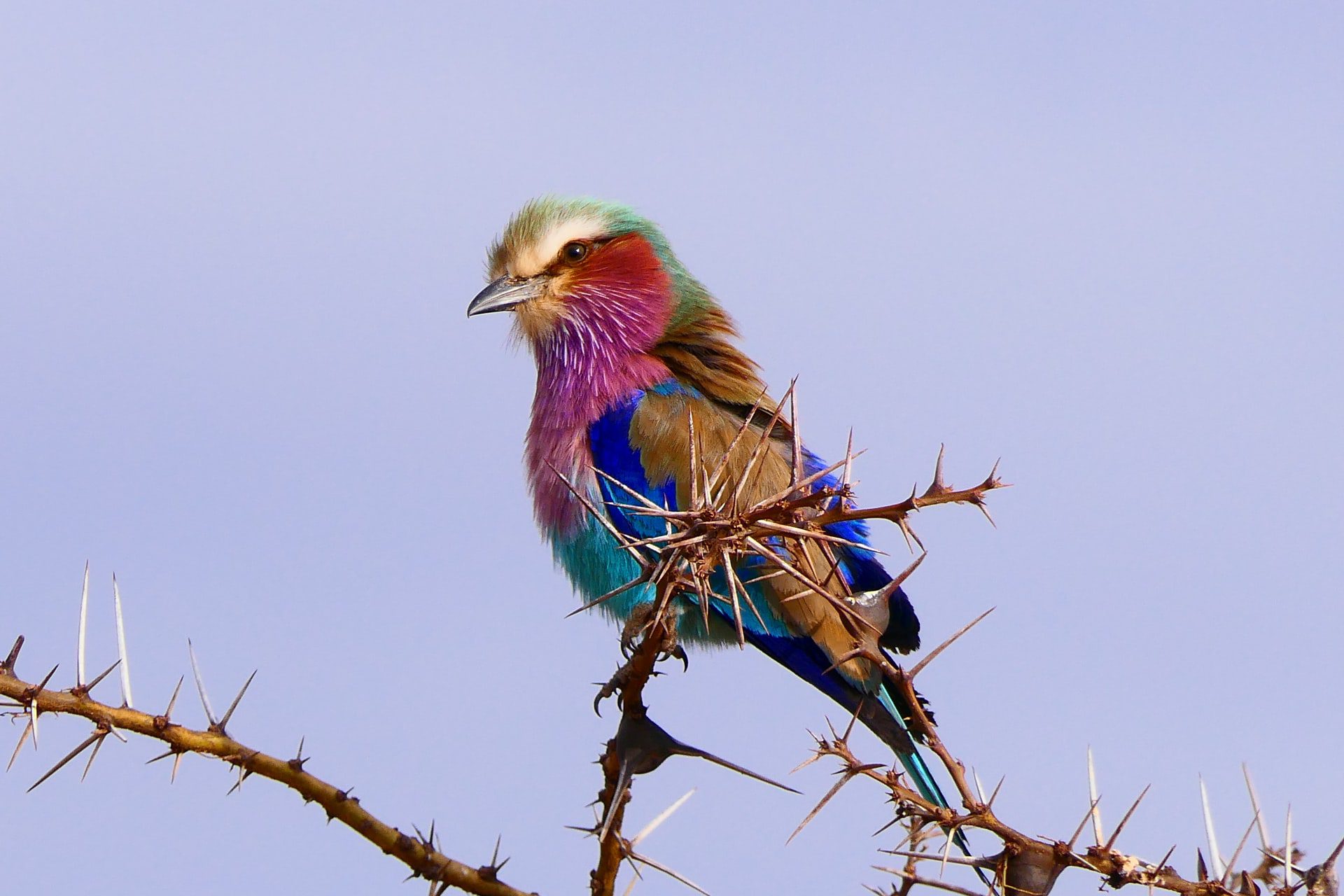 Drive back to Arusha there will be an opportunity to stop at the Cultural Heritage Center {Tanzania game stone which founded only in Tanzania} for some shopping before getting Kilimanjaro International Airport.

Welcome To Expect In Africa Safari